Archaeologists have discovered a previously unknown early Saxon settlement during excavations near Burnham-on-Crouch. 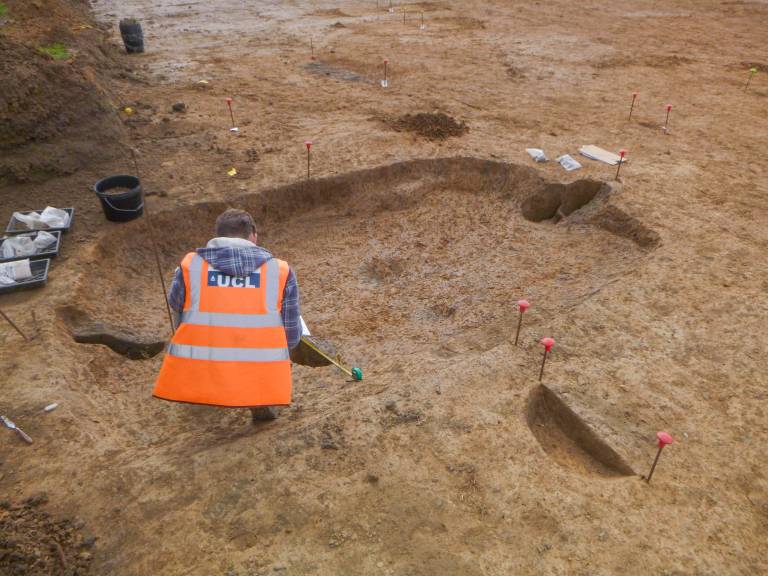 The find, dating to around AD 400-600, was made during archaeological investigations ahead of development of the site by Taylor Wimpey. Emberton Grange, a development of two, three and four-bedroom homes, is due to launch to buyers this summer.

Archaeological project managers RPS and archaeologists from UCL’s Archaeology South-East were commissioned by Taylor Wimpey to excavate and record this locally important archaeology.

The most exciting find was a Saxon ‘sunken-featured building’ or SFB. This was visible archaeologically as a large, flat-based pit with post holes at either end (see above), which would have supported an overlying structure.

SFBs are commonly found at Saxon settlement sites, often interpreted as simple A-framed buildings with a gable roof extending to ground level. Archaeologists are still debating whether they had sunken or suspended floors, and whether they were occupied and used for craft activities or used only for storage.

Artefacts recovered from inside the Burnham-on-Crouch SFB included a particularly nice example of an Early Saxon double sided composite antler comb. In addition, loom weight fragments suggest textile production was happening in the vicinity, and Saxon pottery was used to date the building to AD 400-600.

RPS Archaeological Director Robert Masefield said, “The evidence suggests a small-scale settlement close to the Crouch Estuary, an obvious entry point for the newcomers. This is the first such settlement found in this area and the later establishment of the medieval church within sight of it may not be entirely coincidental, as scattered early Saxon farming settlements were precursors of the Late Saxon parishes established around churches”.

As well as the Saxon occupation, evidence of much earlier human activity dating to the Bronze Age and Iron Age was found on site.

Gemma Stevenson, who managed the archaeological project for Archaeology South-East, said, “These excavations demonstrate the presence of people living or working here from the late Prehistoric and early Saxon periods, which adds to the history of the development of the area. The findings at this site are particularly locally significant given the sparse evidence for Saxon occupation in Burnham-on-Crouch, and are a great addition to the story of the town.”

Peter Monk, Pre-production Manager for Taylor Wimpey London, said: “It’s very exciting to see such significant finds at our Emberton Grange site. To be able to explain the history of the land to our new residents will really help to give them a picture of what life was like here, and we are very grateful to RPS and Archaeology South-East for their work.”

With the excavations now complete, archaeologists are undertaking the essential post-excavation analysis of all the archaeological evidence and artefacts found on site. This detailed work will allow the story of the Early Saxon settlement at Burnham-on-Crouch to be told to its fullest.