“Sumor is icumen in”: Celebrating a medieval midsummer

Did you watch the sun rise on the longest day of the year? Celebrating the summer solstice has a long tradition - in this blog post Lorna explores how the peoples of the Medieval period celebrated midsummer. 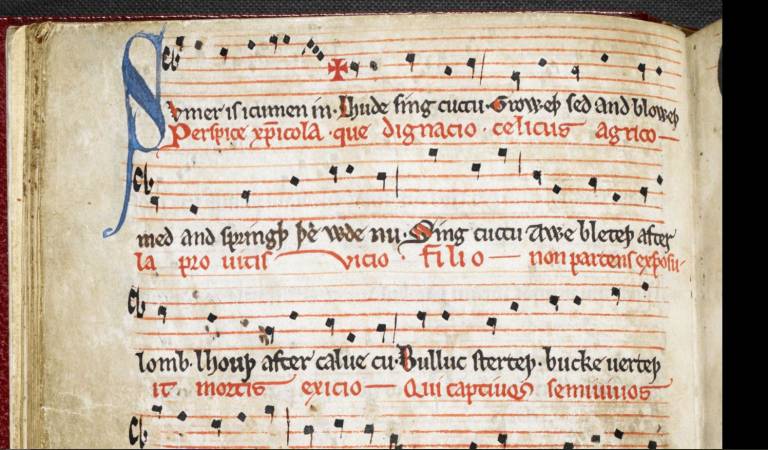 Midsummer (or the summer solstice) in the northern hemisphere is the longest day in the calendar year, typically around the 20th or 21st June. In 2021 the longest day will be Monday 21st June and will see 16 hours and 38 minutes of sunlight.

In the modern world the solstice is often associated with Neo-Paganism, with hundreds of people descending on Stonehenge to watch the sun set and rise – this year via livestream thanks to Covid-19 restrictions.

However, the celebration of the summer solstice or midsummer is a long-held tradition, suggested in the practices of the Neolithic, and enduring through the Roman occupation, the advent of Christianity, the medieval period and to the modern day. Midsummer is both a celebration of sun, a link to the past but also a melancholic event signalling the turn of the year. The early medieval fascination of the change in season and the length of days is seen through the Old English writing of the time.

The first text we are going to look at is the De temporibus anni written in the 10th century in Winchester by a monk called Aelfric (Blake 2009). The work is a written narrative of the time of year starting with creation, ideas of day and night and how the year works as well as why religious festivals are at certain times of the year. What is most notable is how the stars, the moon and the place of earth is discussed.

-----When the day is lengthening, the sun moves northwards until it comes to the sign which is called Cancer; at that time is the summer solstice, because there it turns back southwards again to the winter solstice and there stands still. (Blake 2009)

The second text in Old English is called the Old English Metrical Calendar or the Menologium also written in the 10th century by a monk called Byrhtferth. This poem covers the religious year explaining when the major festivals are and certain saint’s days. It also points out why these saint’s days are on these days.

-----Then after two and four days, the (next) month, Ærra Liða, June, brings long (daytime) hours to town, to our enclosure, during which the gem, the brightest of stars, ascends into heaven above, highest in the year, and descends from its standing-place, sinks to its setting. Then the fairest of lights and of things in this world wishes to behold the ground longer and go more slowly over the earth. Then, after thirteen and ten nights, the thegn of heaven, the Lord’s darling, John (the Baptist) was born in the days of old. We celebrate the feast with great respect at the summer solstice. (Karasawa 2015)

The fascination with midsummer and the importance of the sun, now with an added Christian saint’s day of St John, meant that the celebration of the longest day of the year continued through the medieval period. With the change of calendar the merger of two dates happened. The summer solstice is on the 20th/21st June (metrological) and the Nativity of John the Baptist is on the 24th June because of the calendar shift in a revised Julian calendar these dates and the festivities on them became merged (Karasawa 2015: 80).

From the thirteenth century, the feast of Corpus Christi falls in the first two weeks of June (in the modern day it occurred on June 3rd in 2021 and will be on June 16th in 2022). This was a major festival in the medieval period and in England had a tradition of this being the time of year for members of town craft guilds to perform “mystery plays” (Stevens 2014). These were interpretations of biblical stories of which each “craft guild” e.g stone masons, carpenters etc would perform one story which was a straight telling of a biblical story such as Noah’s ark, the Nativity and Christ’s Passion with a folk element.

These plays survive in collections known as “cycles” and are attributed to the place where they were performed (Burrow 2008). One collection from Wakefield is attributed to the Wakefield Master. The most famous of this collection is the Second Shepherd’s Play which is the story of the Nativity following the shepherd and the visit from the angels (Cawley 1993).

The celebration of these biblical stories fits perfectly in the cycle of the year laid out in the early medieval writings and especially in England the weather was probably more favourable to perform these in June than any other time of the year! Though suppressed by the reformation these celebrations morphed into fetes and fayres to bring communities together.

Midsummer continues to be a topic of celebration in middle English writings. A famous example is a song found in a manuscript housed by the British Library written around 1261. It is the oldest known example of six part polyphony (I discussed plain chant and polyphony back in December) is called “Sumor is icumen in” and the lyrics tell of how summer has arrived with the song of the cuckoo, the seeds are growing and the flowers are blooming!

-----Summer has arrived, Loudly sing, cuckoo!
The seed is growing, and the meadow is blooming,
And the wood is coming into leaf now, Sing, cuckoo!

The manuscript has musical notation and instructions on how to sing this particular song as a round or a “rota” (Fisher 1994). Listen to it being sung traditionally in this YouTube video, or a more modern version here by folk musician Richard Thompson, which also preserves the “round” singing.

After the reformation, the festivals surrounding the summer solstice did pass back into folk lore. The new protestant church stopped the performing of mystery plays, the charting of the stars from a religious viewpoint was discontinued and songs like “sumor is icumen in” became folk songs again. However, the human interest in the longest day of the year did not get completely forgotten as proved by the people watching the sun rise at Stonehenge and by an early modern English play by one William Shakespeare in A Midsummer Night's Dream.

A Midsummer Night’s Dream plays off of medieval themes, found in works of medieval writers such as Chaucer, as well as using folk lore and cultural ideas. It is still performed and has been adapted for television, radio and inspired great works of music such as Mendelsohn’s 1842 interpretation of which the wedding march is used in many weddings! You can listen to the intermezzo played by the London Symphony Orchestra.