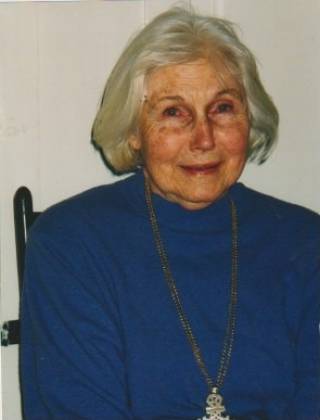 The Anna Sturm Law Travel Prize Fund will provide one prize of £1,250 to a student studying Masters Courses in Anthropology at UCL, for the purposes of funding the travel necessary to complete their research. The research must have a focus on sustainability.

The Anna Sturm Law Travel Prize Fund has been set up by her daughter and grand-daughter in her memory.

Anna (1920–2014) was raised in California, where she attended UCLA. She studied different units including Psychology and Anthropology and later became very interested in Jungian Psychoanalysis. When she graduated she worked as an assistant film editor at Columbia Pictures.  She had wanted to do an Archaeology course but she was told that at the time women could not do this as there were no toilet facilities for women at sites.  This wish to do archaeology, as well as her life-long love of travelling around the world, made this travel award for archaeology or anthropology students a very fitting tribute to her.

In 1949 Anna moved to London where she married Peter Law, and together they built up a wonderful collection of paintings and antiquities.  Anna’s mother was an artist and art teacher and Anna also had a strong visual sense which was passed on to her daughter and granddaughter also artists. Anna expressed her visual skill in her homemaking and in commissioning a family house to be built by Ted Cullinan, on the Sussex Downs, a project that she was closely involved with.

Anna was a very early supporter of Greenpeace and Friends of the Earth and she had a strong interest in environmental issues. Had she been born at another time, she may have become an architect, archaeologist or anthropologist. She had a wonderful playfulness, rich inner life and a fascination with dreams, the Goddess and the ancient world.