The Human Evolutionary Ecology Group, located in the Department of Anthropology at UCL and led by Ruth Mace, is one of the largest groups of researchers investigating human evolutionary ecology in the UK. We study human behaviour and life history as adaptations to local environments - which includes not only human behavioural ecology but also evolutionary demography and cultural evolution. Areas of interest include human reproductive scheduling and life history, patterns of parental investment, the origins of human marriage and kinship systems, cultural phylogenetics and the evolution of social institutions, and the evolutionary ecology of co-operation. We are running a range of projects including those based on field studies ranging from traditional rural African and Asian populations to post-industrial, urban populations in the UK and Europe, and some that are making use of existing historical or modern medical or demographic datasets. 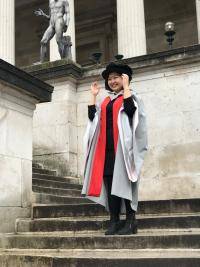 Congratulations to Juan Du for graduating with her PhD, which was titled 'Family and group dynamics in a Tibetan pastoralist society'. And also she has now secured an Associate Professorship in Life Sciences in Lanzhou University. She will, we think, be the first lecturer teaching an undergraduate course in Human Behavioural Ecology in China.

Ruth is currently on sabbatical and has a visiting professorship at Lanzhou University in Gansu Province PRC, where she has established  HEEG Lanzhou.

Congratulations to Bram van Leeuwen for successfully passing his PhD viva. His examiners were Alexandre Alvergne and Tom Dickins.

12/2015
Ruth has been appointed as the incoming President of EHBEA (the European Human Behaviour and Evolution Association). She will be President from 2016-2019.

UCL has set up a new website covering all those that are working in human evolution at UCL. www.ucl.ac.uk/human-evolution

Congratulations to Matt Thomas who has successfully completed his viva. Examiners John Ziker and Nichola Raihani passed him without corrections!

And Ruth have written a more popular article about it in theconversation website: Sino-Tibetan populations shed light on human cooperation

12/2014
Congratulations to Emily Emmott for successfully completing her PhD viva with only minor corrections.  She is still with us in Anthropology as a Teaching Fellow.

11/2014
On 26th November at 7pm Ruth Mace will join a panel at the Royal Institution giving short presentations and discussing 'Humans and other animals: the tangled web of culture'.

10/2014
Ruth is giving a Plenary lecture at the Inaugural meeting of the Polish Evolution and Human Behaviour Society in Wroclaw on October 24th.

09/2014
Congratulations to Nicolas Montalva on successfully completing his PhD viva.  He is now returning to Chile to take up a lectureship in biological anthropology.

Congratulations to Nienke Alberts and Kit Opie on the birth of their baby son Nils!

10/2013
Congratulations to Hannah Lewis on the birth of baby Maisie Alice Phoebe Dumbrell!

09/2013
We hosted a meeting for researchers to discuss work on a range of approaches to understanding human co-operation.

04/2013
Ruth Mace was talking to Mariella Frostrup on Radio 4 about birth order effects, specifically related to her work with David Lawson and Emilly Emmott.

03/2013
David Lawson has been awarded a 3 year MRC Population Health Fellowship at the London School of Hygiene and Tropical Medicine beginning in September 2013.

03/2013
Ruth Mace, Jia-Jia Wu and colleagues at the Chinese Academy of Sciences have published a paper on Proc. Royal Society B: Communal breeding promotes a matrilineal social system where husband and wife live apart

01/2013
Congratulations to Heidi Colleran for completing her PhD on "The evolutionary anthropology of fertility decline in rural Poland" 08/2012
Antonio Silva and Ruth Mace have published a paper in PLOS One: Lost Letter Measure of Variation in Altruistic Behaviour in 20 Neighbourhoods.

06/2012
Two of our PhD student won awards at the EHBEA and HBES conferences. Emily Emmott was awarded the best student poster at EHBEA and Heidi Colleran won the new investigator award at HBES.

The Department of Anthropology at UCL offers a taught MSc in Human Evolution and Behaviour, which includes courses on human and primate behavioural ecology.

For more information, please visit the MSc in Human Behaviour and Evolution page.