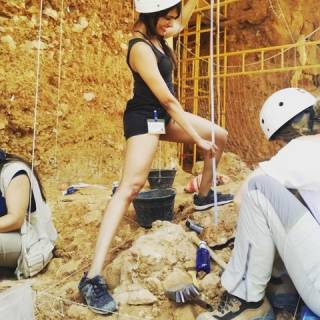 My project focuses on two highly debated issues in Palaeoanthropology:  the identification and taxonomic position of the last common ancestor of Neanderthals and Homo sapiens, and the classification and phylogenetic relationship of the Middle Pleistocene fossil record in Europe. The principle aim of this research is to shed light on the taxonomic and phylogenetic relationships of the Early and Middle Pleistocene hominins from Europe. To this end, I will characterise the morphological variability of the lower third premolar crowns of hominins (Homo antecessor, Early Pleistocene; Sima de los Huesos hominins, Middle Pleistocene) from the UNESCO World Heritage Site of Sierra de Atapuerca, Spain, along with several other European, Asian and African populations from the Pleistocene and the Holocene, by means of micro-computed tomography (µCT). By ascertaining inter- and intra-population similarities and variations in species belonging to different geographical locations and epochs, this research will allow for a better understanding of hominin variability in the European Pleistocene. The objectives of my thesis would then be to: