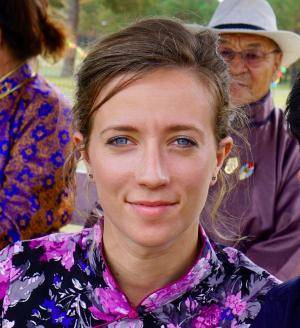 I have been carrying out anthropological research in Mongolia since 2012. Focused mainly on the capital city, Ulaanbaatar, I have examined a variety of urban livelihoods, including how young elite women construct their futures through their self-presentation, the daily work of seamstresses in a shamanic gown workshop, how cashmere workers negotiate their aspirations in a context of factory employment (published in Inner Asia), and the training of young contortionists. My PhD research consisted of 22 months based in the outskirts, or ger districts, of Ulaanbaatar, areas that surround the built-up city centre and are characterised by their distinctive mix of architectural styles, containing both felt-walled 'yurts' (ger in Mongolian) and self-built brick and wood houses contained within fenced homesteads, called hashaa. These understudied areas have been expanding since the 1990s and are now home to a majority of Ulaanbaatar's population, including many recent rural-to-urban migrants who often struggle to find employment in the city and rely heavily on kin networks for access to goods and services. My research is therefore focused at the intersection of domestic life and the post-socialist welfare state, examining how people get by in these underserved areas. The themes include kinship and kin networks, the politics of infrastructure, the post-socialist welfare state, ethnographies of industry and bureaucracy, the anthropological use of scale, linguistic anthropology approaches to sociality, performativity, temporality and new ways to conceptualise relations in anthropology.