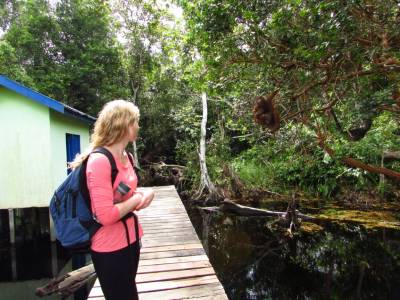 My current research focuses on ethical questions in orangutan conservation-especially rehabilitation and reintroduction (R&R), which involves helping orphaned orangutans to become healthy, independent of humans, and socially and ecologically capable of surviving with greater independence before release into the wild. Although much has been written on the conservation value of R&R compared with other activities, and the need for further collaboration amongst orangutan conservation groups, the role of ethical and philosophical stances in shaping whether, and how, practitioners think R&R should be practised has received little attention.

My research has involved interviews with practitioners with some decision-making capacity (e.g., upper- and mid-level managers at rehabilitation centres and field projects, donor and donor-NGO directors, researchers, head office managers, and knowledgeable commentators) and visits to the majority of orangutan rehabilitation projects on Borneo and Sumatra. Among other matters, I have explored practitioners' views on a number of related ethical questions: