The life-cycle of clothing in contemporary urban India: an anthropological study of recycling and the cultural perception of materials.

My research interests include the anthropology of new and re-fashioned materials, including contexts of innovation, material mobilities and user perceptions, with a specific focus on textiles and textile technologies.

I am currently researching emerging concepts of circular textile economies, with a focus on open source initiatives, the role of technology and user perceptions. This study will contribute to the research platform 'Textile Imaginations: Innovation and Perception'.

My regional focus has included India (including extended periods of ethnographic research in Delhi, north India and Kerala), the UK and north Germany. 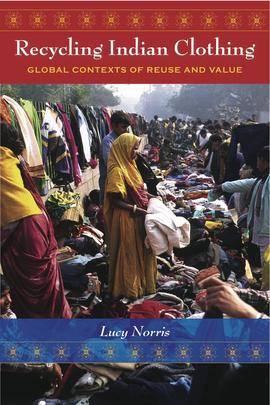 Norris, Lucy and Botticelli, Julie. (Eds.) 2012. Trade and Transformations of Worn Clothing. A special issue of Textile: the Journal of Cloth and Culture, Vol. 10, Issue 2.

Norris, Lucy. 2006. 'What makes a textile modern? The recycling of clothing in the Punjabi shoddy trade' in Rogerson, C. & Garside, (Eds.) The Future of the Twentieth Century: Collecting, Interpreting and Conserving Modern Materials. London: Archetype.

This website features my research on global secondhand clothing economies and local recycling practices. It provides more information about the publications, exhibitions, photography and film projects that have arisen from projects in India and the UK.

Meghna Gupta's award-winning short documentary Unravel features the textile recycling industry in north India which I have been researching.

Unravel can now be watched online at aeon.co

Exhibition: Everything Must Go!

This exhibition was installed at the Bargehouse, South Bank, London, over a weekend in January 2012, and featured collaborative projects between artists and academics working on the ESRC funded Waste of the World project.

Content was developed from my research in north India and Nicky Gregson & Mike Crang's research on shipbreaking in Bangladesh and the UK. It included large format photographs by Tim Mitchell, the premiere of Meghna Gupta's film Unravel, upcycling workshops by Lizzie Harrison and Remade in Leeds, recycled fabric by Kate Goldsworthy, and was supported by Oxfam, who profiled their Frip Ethique project in Senegal.

An exhibition of photographs by Tim Mitchell documenting the recycling of cloth in Delhi were displayed at the Horniman Museum, London, from May 2008 to January 2009. Images include both the recycling of saris and everyday Indian clothing, and contrasted this with the industrial recycling of imported Western clothing.

A selection of these photos can be found at this Guardian Online gallery.

This research was funded by a British Academy Small Research Grant.

As part of this collaborative ESRC-funded programme, I conducted research into various aspects of the global trade in textile manufacture and waste. This involved extensive fieldwork in both north and south India.

Both the mountains of cast-off clothing circulating the globe and the marginalisation of hand-crafted high quality domestic products can be viewed as a relative devaluation in the face of increasing over-production of cheap, low quality, high volume textiles.

This fieldwork widened the scope of the waste project to include the detrius of industrial decline such as buildings and equipment, and the ensuing waste of skill and livelihood. The research looks at competing local perceptions of the potential for reviving the handloom industry, despite highly mechanized competitors, in the broader context of the political ideology of handloom in India, the local influence of communist politics and the cooperative movement, against the increasing visibility of social movements outside India advocating slow fashion, fair trade and eco-friendly products.