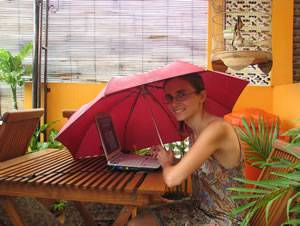 A project I have been working on since 2013 explores broadly understood ethics in adventure sports. In cooperation with Deborah Pinniger, a renowned kayaker, an educator and an anthropologist, we are focusing on a group of teenage kayakers systematically training towards becoming independent and competent paddlers. Through direct observations on and off the water, interviews and participatory methods, we aim to answer a set of correlated questions: what are the social principles originating in shared physical exposure in precarious environments and what is the role of risk and direct engagement with the natural environment in reformulating of ethical imaginations away from the dominant values of a market-oriented, text-based meritocratic society.

My doctoral project revolved around the relationship between intimacy and national imagination in Japan. Ethnographically, I focused on Indonesian care workers employed in Japanese eldercare institutions since 2008. I explored the Indonesian workers' interactions with the cared-for elderly, and with their Japanese colleagues and employers. Placed against the background of mass media representations, the Indonesian workers' experiences served as a basis for discussion of the role of bodily experiences in shaping relations of trust, forging interpersonal intimacies and ultimately affecting the image of a national "other" in Japan.

I have also been involved in research activities for The Costs and Benefits of the London Living Wage project overseen by Professor Jane Wills from School of Geography at Queen Mary University of London. A report based on this research can be found at: www.geog.qmul.ac.uk/livingwage/pdf/Livingwagecostsandbenefits.pdf

Świtek, Beata. 2014. Evaluation report of the services provided by Westminster Befriend a Family.

On simultaneity: the utopia of play and paradox in the making of mundane sociality. Panel co-convened (with M. Shapiro) for the 12th Congress of International Society for Ethnology and Folklore​ (SIEF2015). Zagreb, Croatia, 21-25.06.2015

Can anthropology work for migrants? Anthropology(ists) at work in charities and NGOs. Panel convened for The Royal Anthropological Institute Anthropology in the World Conference. London, UK, 8-10. 06. 2012

Ascription of personhood. Care work and migration in Japan. Paper presented at the 10th Annual Conference of the Romanian Society for Social and Cultural Anthropology: Cultures of Mobility and Immobility. Sibiu, Romania, 17-19.10.2013

Comparative socialities of migrants and people with disabilities. Paper presented at the Association of Social Anthropologists of the UK and Commonwealth Conference: Vital Human Interactions with Living Things. Lampeter, UK, 13-16. 09. 2011

The socio-political identity of Indonesian immigrants in Japan. Paper presented at the 24th Association of South-East Asian Studies in the United Kingdom (ASEASUK) Conference. Liverpool, UK, 20-22. 06. 2008