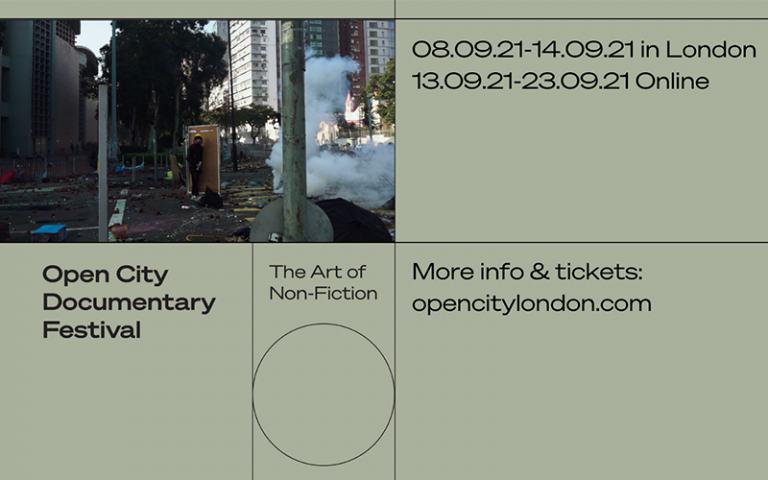 On its eleventh edition, the Open City Documentary Festival will run 8-14 September in London and 13-23 September online.

Following a successful digital iteration in 2020, this year’s hybrid approach will bring films, audiences and filmmakers together again in the cinema, while continuing to offer a chance to experience non-fiction cinema to audiences across the UK.

Open City Documentary Festival returns to its traditional venues – Bertha DocHouse, Curzon Soho and the ICA – and extends for the first time to the Genesis Cinema in the East and Ciné Lumière-Institut français and the Goethe-Institut in West London. The Festival Hub in Chinatown will host the free Expanded Realities exhibition and a programme of talks and workshops. Mimosa House, an independent non-profit gallery space in Holborn, will present Alia Syed’s exhibition Meta Incognita (1-11 September, free entry).

Open City Documentary Festival 2021 will celebrate the art of non-fiction through 47 new non-fiction films. The new film programme includes 10 world premieres and 26 UK premieres, and films from 26 different countries. 6 works in the programme are first or second features.

World premieres of Icarus (after Amelia) by Margaret Salmon and Inner Outer Space by Laida Lertxundi will open the festival on Wednesday 8th September at Curzon Soho. Filmed during the extended lockdown period – between March 2020 and May 2021 – in and around Govan, Glasgow, Icarus (after Amelia) is a quasi-anthropological study of female labour in contemporary Britain. Inner Outer Space is Lertxundi’s first film since relocating to the Basque Country from California.

Open City Documentary Festival will close on Tuesday 14th September at the ICA with a rare 16mm projection of James Benning’s TEN SKIES (2004), a work to be experienced communally in the cinema after a year of cinema closures. The screening also marks the launch of Erika Balsom’s new book Ten Skies (Fireflies Press, 2021).

Tickets are now on sale for all screenings & events. We also offer discounted accreditations for UCL students and staff, since we're based at UCL Anthropology. Our delegates gain access to films, talks and networking opportunities. We're looking for volunteers to join our team and help us deliver this year's edition.