Our research research is in quantum cavity optomechanics and applications of cold atoms.  For further information please contact Peter Barker. 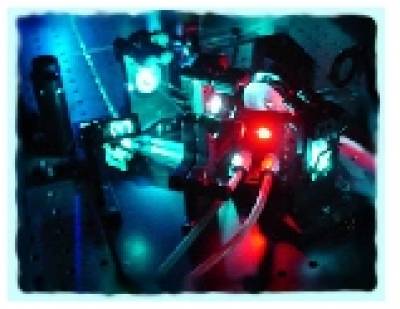 The field of optomechanics, in particular the cooling of small mechanical oscillators, is currently one of the most exciting and rapidly growing areas of physics. An important question is whether one can not only reach, but also operate these devices in the quantum regime. In addition to the fundamental interest, there are promising possibilities for highly sensitive measurements of weak forces at the quantum limit (in other words with a displacement limited only by the width of the ground state of the mechanical oscillator). It will also have applications for generating entanglement between the light field and the mechanical modes. We are currently exploring cavity cooling of charged nanoscale polarisable particles in a hybrid trap which consists of optical trap formed by an optical cavity and a Paul trap. Such particles (in the 100 nm size range) interact strongly with a cavity field and also the Paul trap electric fields, allowing both trapping and cooling. Since in these cooling schemes no internal resonance is involved, no detailed knowledge of the internal structure of the particle is required. Significantly, unlike usual cavity optomechanics schemes, where the object is physically connected to the environment, the nanoparticle to be cooled is held in a conservative potential so is well isolated from the environment. This confers unique advantages, over conventional optomechanical schemes, in relation to the ultimate objective of cooling to the ground state. We have recently cooled these particles to mK temperatures and further cooling to the ground state is feasible with a higher finesse cavity operated at pressures below 10e-7 mBar. A research blog on this topic can be found here. 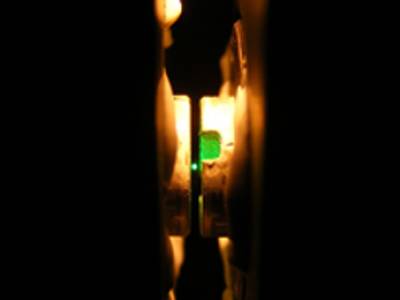 We collaborate with T. Monteiro, S. Bose and A. Serafini at UCL and Gavin Morley at Warwick.

There is currently considerable interest in the use of weak measurements, first introduced by Aharonov, Albert and Vaidman, to explore fundamental quantum processes and for quantum metrology. Of particular impact has been the experiment of Kocsis et al. that employed weak measurements of photon momentum followed by a strong measurement of position to reconstruct average trajectories of photons. Here, the polarization of the photon was used as a pointer that weakly coupled to the transverse photon momentum. To date this type of experiment has only been performed on photons, of which a classical wave optics interpretation can be also applied. We are developing a two-slit, matter-wave interferometer that uses cold argon atoms to perform weak measurements of momentum. Here, the pointer that weakly couples to momentum is the spin of the 5 Zeeman states of the laser cooled metastable (4S[3/2]2) argon atoms which are dropped through two slits formed within a metallic film. This experiment will also allow the reconstruction of average trajectories of the atoms within the interferometer, but unlike the interference of photons, this effect can only be described by a quantum analysis

Optomechanical devices on the nano- and microscale are important tools, both for exploring fundamental quantum physics, and for technological applications. These systems, in which mechanical motion is controlled by light, can be used as exquisitely sensitive force, position or mass sensors. Several optomechanical devices have been cooled to their motional quantum ground state, opening the way to quantum limited sensing, quantum transduction, and the exploration of the limits of quantum physics.

An important class of optomechanical systems exploit high optical quality factor whispering gallery mode (WGM) resonances in objects such as dielectric spheres or toroids. High-Q WGM resonators have been used for microwave-to-optical conversion, optical storage, frequency comb creation, and single-molecule sensing in both air and liquids. Cooling the resonator enhances many of the aforementioned applications. The interaction between the optical WGM and internal mechanical modes of the resonator leads to strong optomechanical coupling, allowing sideband-resolved cooling of radial breathing modes of a toroid when light is red-detuned from a resonance. Feedback cooling is possible, using the sensitive transduction of the distance between the WGM resonator and an object within its evanescent field. Using this type of transduction, cooling of the center-of-mass (c.o.m.) motion of a nanobeam using radiation pressure has been demonstrated, as well as passive cooling of the flapping motion between two stacked microdisks using the dipole force.

WGM resonances also offer the ability to cool and manipulate the external c.o.m. motion of the cavity that supports them. Cooling the c.o.m. of massive objects opens the way to exploring quantum physics at large mass scales. A mechanism similar to the Doppler cooling of atoms, which utilizes narrow WGM resonances, has been proposed. Recently, the mechanism for transducing the c.o.m. motion of a silica microsphere-cavity on the end of a silica pendulum (analogous to our system) has been observed and studied using light coupled into a WGM from a tapered optical fiber.

We use the WGM of a microsphere-cantilever to transduce and feedback-cool its c.o.m. motion, extending optomechanical cooling into the microgram regime, and offering the potential for high-resolution sensing. Light is coupled into the WGM via a tapered optical fiber, and its motion is also feedback-cooled via the same transduction, demonstrating the cooling of coupled-oscillators. The strong optical dipole force between the microsphere and the taper allows us to cool the lighter (effective mode mass micro-g) taper, while a piezoelectric stack (PZT) attached to the microsphere-cantilever allows us to damp its motion (effective mode mass 20 micro-g).