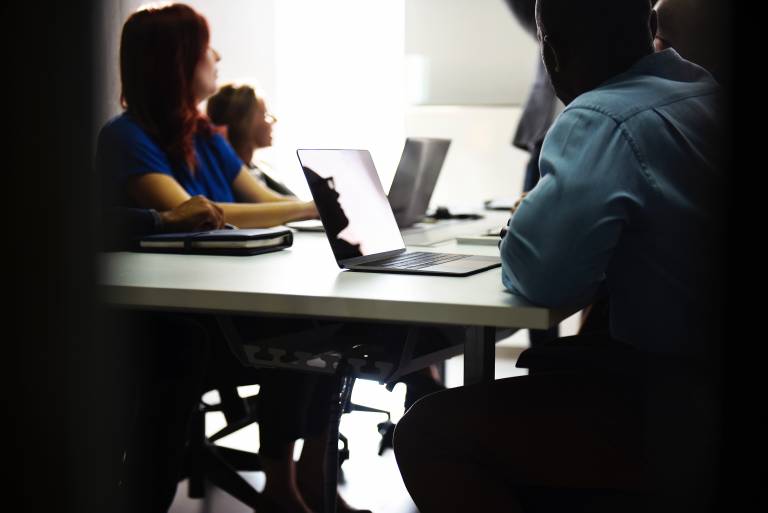 UCL-IA research associate Dr Emily Morris is Principal Investigator for research collaboration on ‘Mobility-Accessibility-Sustainability for Havana’ (MAS+Havana), involving a multi-disciplinary research team from UCL and Havana’s technology university (known as CUJAE), with the support and participation of Havana’s transport authority (Dirección General de Transporte, DGT) and other Cuban institutions. Core funding for ‘Improving mobility, quality of life, and accessibility for disadvantaged communities in Havana’ supports community workshops and other activities (for example, Mi Plaza es Mas), and has helped the DGT to secure EU funding to draw up the city’s ‘Sustainable Urban Mobility Plan’ (SUMP). The MAS+Havana responsive programme of research/technical support supports the DGT as it develops pilot projects, and Dr Morris has secured additional funding for inter-disciplinary research and inter-agency engagement on related activities. So far, these have included: workshops and research collaboration on climate finance for mitigation in transport (and energy), ‘technology foresighting’ (a review of low-carbon public transport options), street network analysis, and the impacts of transport on health. A spin-off from MAS+Havana is Havana’s inclusion as one of the cities participating in the UCL Development Planning Unit’s ‘Knowledge into Action for Urban Equity’ (KNOW) network.

Taxation and the Persistence of Inequality

In this project, Dr Nestor Castaneda (UCL, IoA), Dr David Doyle (University of Oxford) and Dr Cassilde Schwartz (Royal Holloway, University of London) link the persistence of inequality in contemporary Latin America to the tax side of the fiscal contract and explain why tax structures have largely remained unchanged or, in some cases, have become more regressive. This project has been partially funded by the British Academy/Leverhulme Fund and the LAC Oxford/CAF Development Bank of Latin America Research Fund to run a number of survey experiments in Colombia and Mexico. They have recently presented the results of these experiments at the American Political Science Association Annual Conference, the European Political Science Association Annual Conference, and the REPAL Annual Conference.

The Popular Historians: American Historical Writing and the Search for an Audience, 1945-present

Dr Nick Witham's research project on American historical writing since the Second World War has been funded by the British Academy, the UK-US Fulbright Commission, the AHRC, and the Institute for Advanced Studies in the Humanities at the University of Edinburgh. A book manuscript resulting from the project is under advanced contract with the University of Chicago Press. At its heart is an exploration of the authorship and reception of significant and widely read popular histories published between the 1940s and the 1990s by American historians Daniel Boorstin, John Hope Franklin, Richard Hofstadter, Gerda Lerner and Howard Zinn. In highlighting the distinct contexts in which this public-facing scholarship was able to flourish, the project furthers our understanding of the public functions of humanities scholarship in an era when demands are regularly made for "impact" on society outside of the academy.

Latin American Studies Journals in the Twentieth and Twenty-First Centuries: the UK and the Brazilian experiences

This project, funded by a Newton Mobility Grant, is a collaboration between Professor Marcos Cueto of the Casa Oswaldo Cruz in Rio de Janeiro and Dr Paulo Drinot. The aim of this project is to strengthen and expand collaboration between UK and Brazilian academic communities and in particular to enhance the research capacity of both UK and Brazil based scholars in the field of Latin American studies through exchange of knowledge, skills and expertise in relation to the editing, management and publishing of academic journals in order to support excellent research, and its dissemination, in both Brazil and the UK, and more generally. The project includes reciprocal visits to the UK and Brazil with lectures and meetings aimed at facilitating knowledge and skills transfer and the organization of a workshop at the end of the project which will involve editors of other UK based and Latin America-based journals of Latin American studies.

Dr Par Engstrom, together with Thomas Pegram (UCL Institute of Global Governance) are currently developing a political and socio-legal study of the evolution of torture and other ill-treatment in Latin America, with a particular focus on what factors have contributed to that evolution and the external influence of international prohibition frameworks. Initially part of a major global study on the impact of torture prevention interventions funded by the Association for the Prevention of Torture, the research draws on both qualitative and available quantitative data through a mixed method research design with the aim to present a highly contextualised picture of measures and mechanisms which contribute to lessening the risk of torture and other ill-treatment.