The Structure of ‘the American Century’ 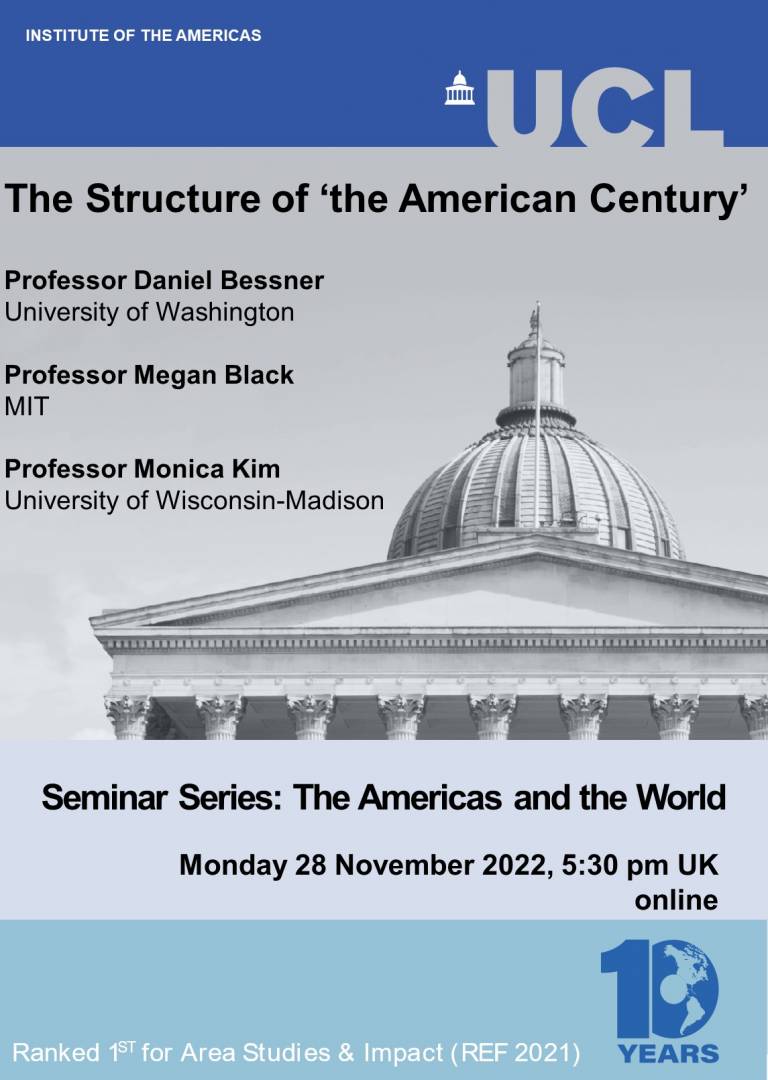 This online panel will explore the structure and nature of ‘the American Century.’ Historians Daniel Bessner, Megan Black, and Monica Kim will discuss the histories of US foreign relations since 1945 and global empire. The conversation will delve into how the US took control of the sinews of diplomatic and economic control, while also considering the state of US global power today. The panellists will hold an opening discussion before taking questions from the audience.

Associate Professor in International Studies at University of Washington

Professor Bessner is an intellectual historian of U.S. foreign relations and also the cohost of the podcast American Prestige'. He is also a Non-Resident Fellow at the Quincy Institute for Responsible Statecraft and a Contributing Editor at Jacobin. In 2019-2020, he served as a foreign policy advisor to Bernie Sanders’ presidential campaign. He is the author of Democracy in Exile: Hans Speier and the Rise of the Defense Intellectual (Cornell University Press, 2018). Professor Bessner has published scholarly articles in several journals and has also published pieces in Harper’s Magazine, The New York Times, The Washington Post, The Guardian, n+1, and other venues.

Associate Professor of History at Massachusetts Institute of Technology

Megan Black is a historian of U.S. environmental management and foreign relations in the late nineteenth and twentieth centuries. She is the author of award winning The Global Interior: Mineral Frontiers and American Power (Harvard University Press, 2018), which analyses the surprising role of the U.S. Department of the Interior in pursuing minerals around the world—in Indigenous lands, formal territories, foreign nations, the oceans, and outer space. Professor Black has published articles and review essays in The Journal of American History, Modern American History, Diplomatic History, and American Quarterly. Her new book project follows a community in Colorado who battled a powerful international corporation intent on blasting through their mountain in search of a mineral of increasing importance to 1970s globalization.

Associate Professor of History and the William Appleman Williams & David G. and Marion S. Meissner Chair in U.S. International and Diplomatic History at University of Wisconsin-Madison.

Professor Kim's scholarship analyses a fundamental practice used by the United States during the era of formal decolonization in the global Cold War: wars of intervention. Her first book, The Interrogation Rooms of the Korean War: The Untold History (Princeton University Press, 2019), tells the story of the changing script of warfare in the mid-twentieth century through the war that was not an official war – the “police action” called the Korean War. Her current project, The World that Hunger Made: The Koreas, the United States, and Afro-Asia, tackles another subject traditionally in the purview of Cold War foreign policy and warfare: development.